Peter Jamieson, SPAB volunteer caseworker, and Chairman and Projects coordinator: Friends of Czech Heritage writes about a remarkable chateau conservation project deep in the Moravian countryside. This extract is taken from the SPAB Magazine, Winter 2015.

In 1938 our insular prime minister, who had barely crossed The Channel in his life uttered those famous words about a ‘quarrel in a far away country between people of whom we know nothing’. Tumultuous events followed, which affected both Czechoslovakia and Britain in widely different ways but often with a similar devastating affect upon the historic buildings of both countries. The War naturally took its toll but willful neglect often did more damage in the post War years.

In 1989 when the ‘Velvet Revolution’ brought Czechoslovakia in from the cold the situation was dire. The institutions responsible for historic buildings and their contents were starved of funds as the state adjusted to the new order. In 1992 the Czech Parliament passed a law that allowed ‘Czech’ citizens only to reclaim their property from the state but many estates, chateaus and other buildings were in very poor condition and had little or no income. It had been many years since they were occupied by family members, who had often been exiled and as a result contact with their past had been broken.

In those early days of opening-up contacts with the UK were established. For instance representatives from The National Trust hosted delegations from the Czech National Heritage Institute (NPU), the equivalent of English Heritage, to pass on their experience of displaying collections and running a commercial organization. Architectural history tours were organized to bring the wealth of what was on offer to a wider audience. 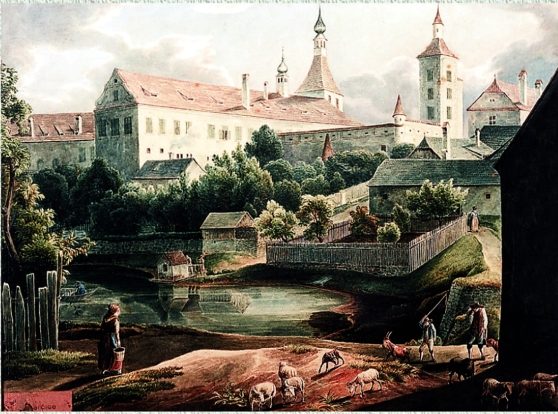 It was out of these events that one small initiative was born with the foundation in 2007 of The Friends of Czech Heritage; a UK charity devoted to providing small ‘pump priming’ grants and working parties it attempts to give grass roots stimulation to struggling local bodies trying to conserve or repair their heritage. The charity has been involved in a variety of projects but perhaps none so haunting as the chateau of Uhercice in Southern Moravia.

The chateau lies deep in the rolling Moravian countryside close to the Czech border with Austria. The implementation of borders across Europe has had a profound effect upon towns and buildings in the course of the 20th century. Originally merely part of the Czech lands of the Austrian Empire, Moravia and in particular Uhercice lay on the corridor that linked Vienna with Prague. This easygoing relationship was jeopardized by the founding of Czechoslovakia in 1918 and frozen solid when the Iron Curtain came down leaving Uhercice in the no mans land of a military border. During the great freeze it was used variously as a state farm, woman’s reformatory prison and barracks for frontier guards. One of the towers collapsed and much of the decorative work was left in a perilous state.

Fortunately in the 1990s the quality and potential of Uhercice were recognized and in 1996 it passed into the care of the National Heritage Institute which has since undertaken a long term programme of restoration work. The roof coverings have been renewed and some of the interiors have been conserved. But progress has been slow partly on account of the ‘remoteness’ of the chateau and the limited number of visitors, which has given it a wistful Cinderella status.

Like many houses in the Czech lands Uhercice has passed through a succession of owners. Founded in the Middle Ages it was remodeled in the 1550s in the Renaissance style with extensive Baroque additions in the late 17th century. The Italian plasterwork of this period by Baldassare Fontana is truly spectacular. The chateau was acquired by the Collalto family, patrons of Mozart, from Northern Italy, an indication of the mobility of cultures within the Austrian Empire, who held it until they were dispossessed in 1945. Perhaps the most arresting sequence of rooms are those created in the early 19th century under the influence of Romantic Classicism, which include the Neo Classical Banqueting Hall with its extravaganza of trompe l’oeil pilaster and allegorical figures. It was this room that became a major project for the Friends of Czech Heritage mentioned above. 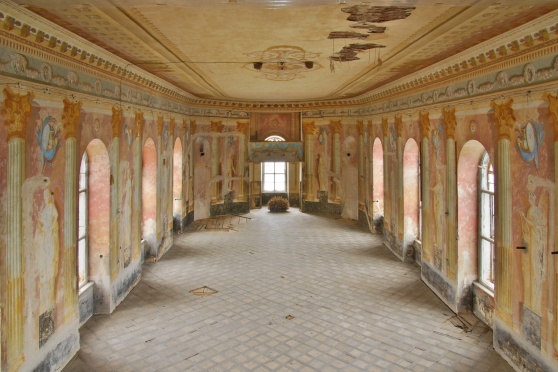 In 2010 attention was focused on securing the Banqueting Hall. The windows needed replacing, archaic electrics replaced but most importantly the vast decorated ceiling needed to be stabilized. Following a survey by an expert conservator it was clear that the ceiling was in danger of collapse and The Friends of Czech Heritage offered to try and raise a grant toward the cost of this work. 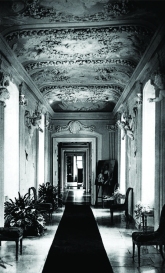 Baroque Cupid corridor prior to the Second World War

The Cupid corridor in its current state

The ceiling was constructed of timber boarding fixed to ceiling joists with woven reed matts fixed to the boards with iron hooks. This formed the key for the two coat lime plaster, which had in many areas lost its key, become delaminated or simply fallen. The decoration had become degraded through exposure owing to the missing windows. The remedial work took a conservative approach, which generally conformed to the SPAB philosophy. The boarding and reed backing were secured using screws and washers and loose areas of plaster either fixed in the same way or by injection. Cracks were filled with lime putty and missing areas of plaster replaced to correspond to the original. The painted decoration was stabilized to prevent further deterioration but the ‘retouching’ has yet to be carried out when funds allow.

As the local guide book states : ‘We can only hope that the genius loci is stronger than time in Uhercice and the chateau will revive at least to an afterglow of its previous beauty’.