Wandering through the South Wales town of Merthyr Tydfil one encounters many relics of its industrial past. Particularly well situated for the establishment of iron works with its natural reserves of coal, limestone and water from the River Taff, Merthyr grew to be one of the most important producers of iron during the Industrial Revolution.

Both the social and physical landscape were subsumed by the industry, spawning innovations in engineering, transport and radical socialism. In 1804 Merthyr bore witness to the world’s first steam locomotive, designed by Richard Trevithick. Isambard Kingdom Brunel created Wales’ first working railway between Merthyr and Cardiff docks in 1840. Chartism flourished along with early trade unionism and the first workers movement.

Alas, the industry sank into decline during the early years of the 20th century and the town has struggled to recover ever since. Much of what remains of the architectural and civic grandeur lies within a miasma of nondescript post war development. Ill-considered demolition has further eroded the urban character of a dense network of streets punctuated by public and communal buildings into a more open and suburban appearance.

One surviving building which has personal significance for me, is the former stable range for the Dowlais Ironworks, built in 1820 for the Iron master Josiah Guest. I became acquainted with it in my youth as a forlorn ruin, where it was unceremoniously used to store wood for bonfire night. Amongst its rather more auspicious past uses were as a barracks for soldiers sent to quash the ironworkers’ riots of the “Merthyr Rising” in the 1830s (I mentioned the town was a hotbed of radical politics) and as a boys school in 1854.

Perched at the top of a hill above my home, its melancholic presence filled me equally with awe and curiosity, a product of a bygone era which was referenced fleetingly in my schooling. Happily its derelict state was not to be permanent. The Merthyr Tydfil Heritage Trust narrowly saved it from demolition, converting it to sheltered homes for the elderly in the 1980s and at one stage it housed my grandmother.

Originally the building was a rectangular form of ranges set around a railway served courtyard. Architecturally all that remains is the primary frontage and the stable house at the rear of the court. The building is a linear two storey symmetrical block comprising nine bay ranges arranged around a central entrance and two end pavilions.

Decoration is used sparingly with tooled grey limestone dressings and quoins. Each of the end pavilions are articulated through recessed blind arches, roundels and are surmounted by coped pediments. A tall broad depressed arch provides access to the courtyard through the central pavilion. Its hierarchical importance in the facade is further reinforced through the circular clock face, dated stone plaque, star shaped tie rods and an octagonal cupola perched on the roof. Warmth and textural interest is provided by the brown hues of the rubble facing stone, indigenous to South Wales. 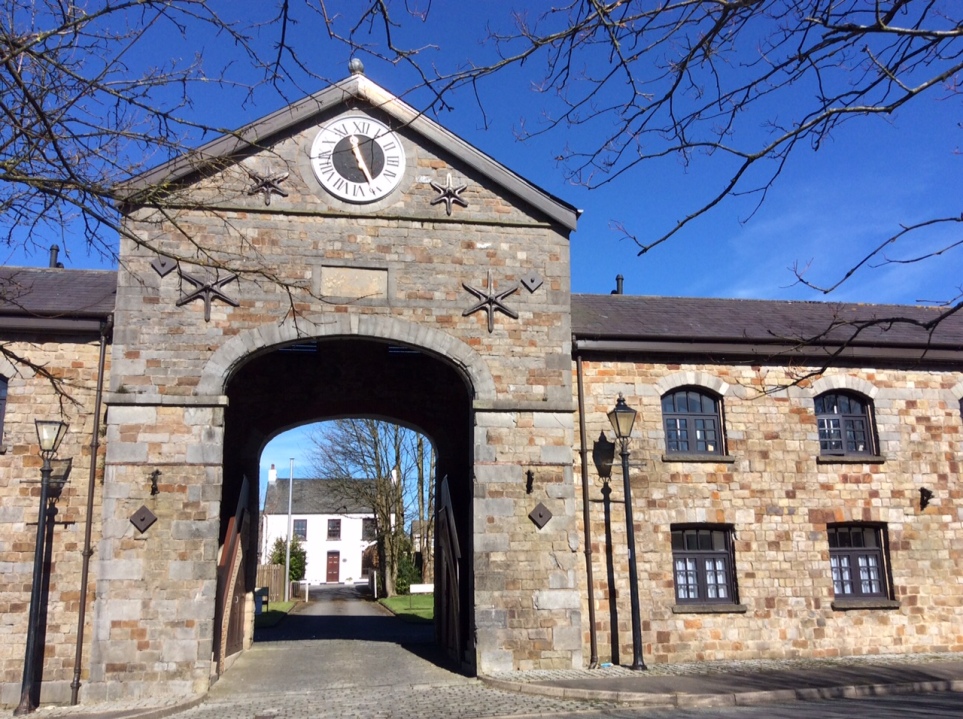 It would be disingenuous of me to claim that all the fabric of the conserved building is original; the roof was replaced, the windows are new and the rear wall was rebuilt with the addition of a timber deck access to the first floor. However, I feel that such a pragmatic approach to conservation is justified; the new fabric was sourced and worked to match the existing and the contemporary deck access is located to the rear subservient elevation.

As my first encounter with historic architecture, it has instilled in me the importance of the simplicity of form, the use of elegant proportions and a delight in natural tactile materials.
Perhaps its most significant lesson is that if we are to retain our built heritage one must find viable and practical new uses. Indeed, my admiration of the former stables was further cemented when I revisited it as part of a field trip as an architectural student. It was held up as a fine example of resurrecting a ruinous building; the flats are generously planned, filled with light and most importantly loved by the residents.

We publish a National Treasure feature in every quarterly SPAB Magazine. Do you have a favourite ‘ancient’ building you would like to tell SPAB members about? If so, get in touch with Kate Griffin at the SPAB : kate@spab.org.uk. If your piece is chosen then you will receive a free copy of The Old House Eco Handbook.