After attending SPAB’s 2015 autumn lectures on curious things found in old buildings, Kelly Appleton-Swaine, building conservation officer, Heritage Lincolnshire, was inspired to find out more about the Old Kings Head, Kirton, a former coaching inn  with a story to tell. This story first appeared in the SPAB Magazine, a benefit of SPAB membership.

The darkness of a cold, wintery night can set the mind imagining all sorts of horrors. Our senses are heightened and small sounds seem large and frightening. The noises of nocturnal animals -scratching, sniffing, scurrying –  mutate, conjuring monsters, witches and evil spirits. In the absence of light, the creaks, cracks and groans of the building around us moving and settling after the heat of the day sound more like someone (or something) knocking, tapping or scraping at the doors and windows trying to get in.
Terrifying! Then we flick the light switch and after blinking in the sudden brightness, everything returns to normal again. It’s only the cat prowling outside, sizzling sap from the cooling fire, a twig tapping against the window. 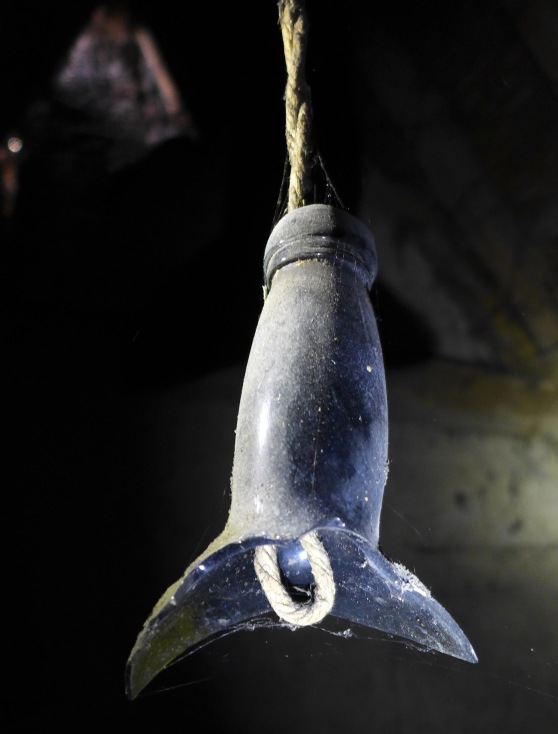 It is no wonder that our 17th century counterparts were so superstitious when the fear of witches, evil spirits, spells and curses was very real. Warding off the supernatural was a powerful motive for actions which seem to us, in our light-filled, busy modern day world, decidedly odd and strange.

After attending the 2015 SPAB Autumn Lectures I understood this a little more, although some aspects did still seem baffling. I could understand why ritual and sacred marks were carved into windows, doors and fireplaces, but the reasons for hiding dead cats, shoes and skulls in walls or under floorboards still took an extra leap of the imagination. It was, however, fascinating and was made more so by Brian Hoggard whose lecture, ‘Shoes in the chimney, cats in the floor’ left me intrigued and wanting to know more. Afterwards as I stepped out into the busy October semi-darkness, I wanted nothing more than to race back to Lincolnshire, find a torch and start scouring Heritage Lincolnshire’s new building conservation project, The Old King’s Head, for signs of marks or buried felines.
Luckily I didn’t have too long to wait until something curious turned up. 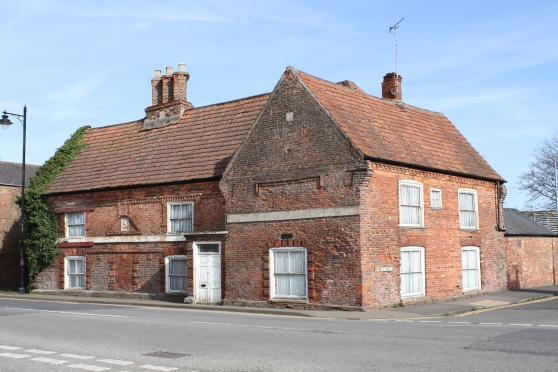 Heritage Lincolnshire is a Building Preservation Trust that works across the county to help protect, preserve and celebrate Lincolnshire’s rich heritage.  Purchased in early 2016, the Old King’s Head is a brick built former coaching inn, located in Kirton, on what was the main London road into Boston. After decades of neglect, the Grade II – Listed building has become at risk and in danger of being lost.

The Old Kings Head was built in two main phases. The first was completed  in 1599 and the second phase, in 1661, consisted of major remodelling. This second phase, as noted by Pevsner, is in the Fen Artisan Mannerist style, an architectural term coined by Sir John Summerson in the 1950s to describe a style of building which was designed and built by craftsmen rather than architects. There are several examples in the Fenland area such as Church House in Boston and Aslackby Hall near Bourne. 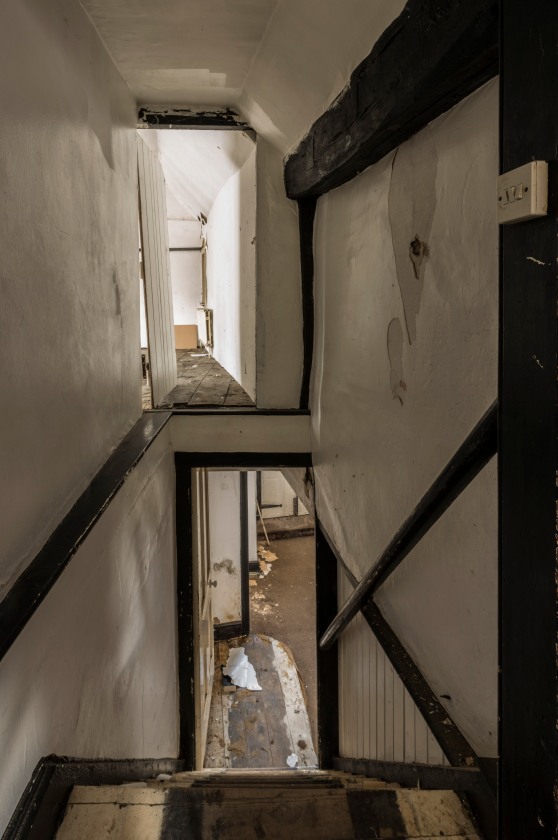 The building has a long and fascinating history as a coaching inn and was mentioned in the autobiography ‘The Life of John Rastrick’ (1650-1727). As a Lincolnshire non-conformist clergyman. Rastrick used his money to release fellow non-conformists and refused to baptise the local children if he felt their parents were ‘loose and scandalous’ people. This made him extremely unpopular with the Kirton locals who, by his own admission, all hated him and felt he was ‘too rigorous and cruell [sic] to make the Children suffer for the Parents faults’. This led to a near fatal incident in 1678 when Rastrick was locked in the dining room of the King’s Head with a Mr William Hunt (Rastrick would not give him communion due to Mr Hunt refusing to repent his ‘former ill life’) who flew into a rage shouting ‘We’ll die together in this room!’  Rastrick only survived due to a neighbour intervening. There were several other lively characters associated with the King’s Head, which remained as a pub until the late 1960’s when it was converted to residential use. 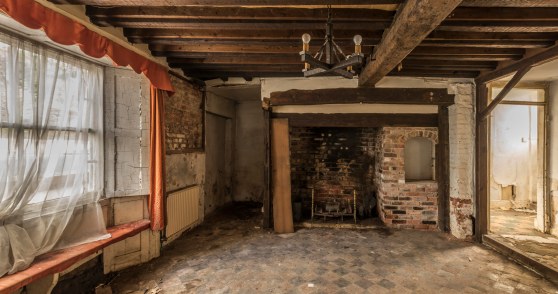 Since purchasing the building, the Trust has been spending time investigating its construction and development and we are benefitting from expert advice on the historic timbers, thatch, paint and mortar. Due to the age of the building we suspected we might find marks or items of apotropaic interest and I attended the SPAB lectures to ensure that we would know what to look out for. We have also been talking to the local community, including previous occupants, and it was at a meeting with a former resident that I first heard of the bottles in the roof.

Up to this point we had not fully investigated the roof space apart from shining a torch into its gloomy depths. We knew that the pub had once been thatched and that a pantile roof had been built over the top of it. From what the torch illuminated, some if not all of the original thatch base survives.

On hearing about the bottles we investigated further and found three broken glass bottles covered in dust and cobwebs hanging from a roof beam. Our source told us that his grandmother ordered him and his siblings never to touch them but they were never told the reason why.  We decided to ask Brian Hoggard to visit to see if there was an explanation. Brian’s visit was enlightening and extremely interesting, and although we still don’t really know why the bottles were put there a few theories have been put forward. When we first saw the bottles the idea of them being ‘witch bottles’ was mooted. Witch bottles are normally buried; they contain items such as pins, nails and urine and are complete (upon burial). 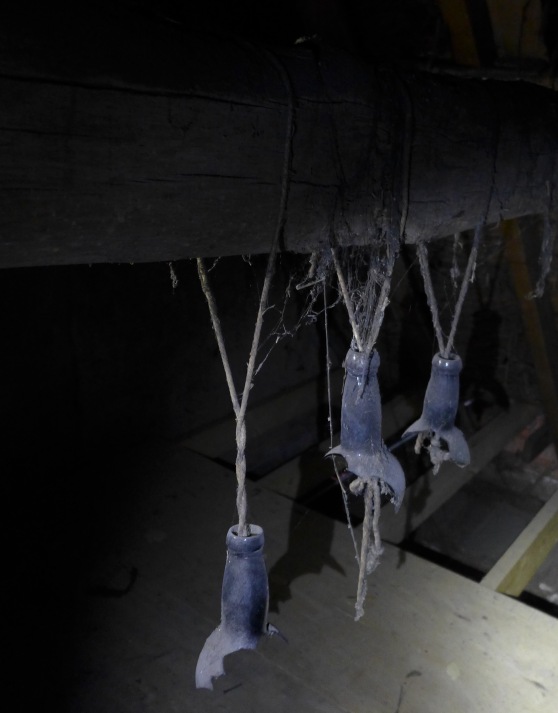 Our bottles are hanging, broken and it is believed that they date from between 1800 and 1850. One theory is that they were used as part of a game when coach men and stable boys would sleep in the roof space and throw stones at hanging bottles, scoring points whenever one was smashed. However the rope that the bottles are hung with appears to be the same age as the bottles and the way it is knotted shows they could only have been hung after they were broken.

If they are not witch bottles or the remnants of a game, what are they? The last and slightly speculative (or romantic) theory is that the bottles represent people who lived in the inn. Looking into historic records we found that a John and Elizabeth Pulford lived at the King’s Head in the mid 1800’s. They married in 1835 and had their first child, William, the following year. Sadly there is record of William’s burial aged 2 in July 1837 and later in the year Elizabeth was buried too, along with another child – Richard Pulford – who was only 25 weeks and three days old.

Could it be that in his grief John Pulford had hung the bottles in the roof as representations of Elizabeth, William and Richard? Choosing broken bottles because they had been tragically taken away from him? It is quite likely that we will never know, but the mystery is intriguing and it brings the building and former inhabitants to life.
Heritage Lincolnshire is only at the beginning of our journey exploring and renovating the Old King’s Head. Our hope is to return it back into a thriving centre of the community.  There is still a lot to discover so who knows what other mysteries we will find on the way?

If you would like to make a donation to the conservation of this historic building and/or to the work of Heritage Lincolnshire, you can do so online.