Ken Hill, a retired journalist and King’s Lynn resident since 1975 writes about a ‘Lynn’ landmark.  He was a South Gate volunteer for a many years.

The South Gate at Bishop’s Lynn, Norfolk, had been welcoming travellers into the town for many years before the Mayor and Burgesses decided it needing repairing yet again in 1437. In that year, the town was prosperous from its sea-borne trade around England and with Europe – particularly through the Hanseatic League.  So the Mayor had a mind to impress visitors arriving by road with a grand entrance gate. 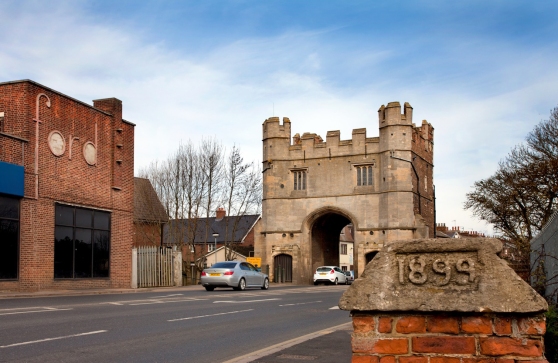 Well-known builders were invited to come up with ideas.  Robert Hertanger of London got the job.  His design used bricks (200,000 of them) and stones rather than wood.  He suggested a 20ft high arch with a fan vaulted ceiling, plus a grand room above where the Mayor could welcome important guests.  He also suggested extra chambers for staff and even an inside toilet with a chute into a convenient rivulet.  He pocketed a good advance and set to.

But as well as his reputation for buildings, Lynn soon realised their new contractor was very fond of alehouses.  The allocated money eventually ran out before the building was completed.  Robert Hertanger’s contract was ended “by reason of his poverty”.  The South Gate was topped off with a temporary roof.  The Mayor and Burgesses licked their wounds, and their successors decided to live with the unfinished job.  At least the gates worked, keeping out the sick, the robbers and the beggars. These were medieval times.  Plagues were still about. 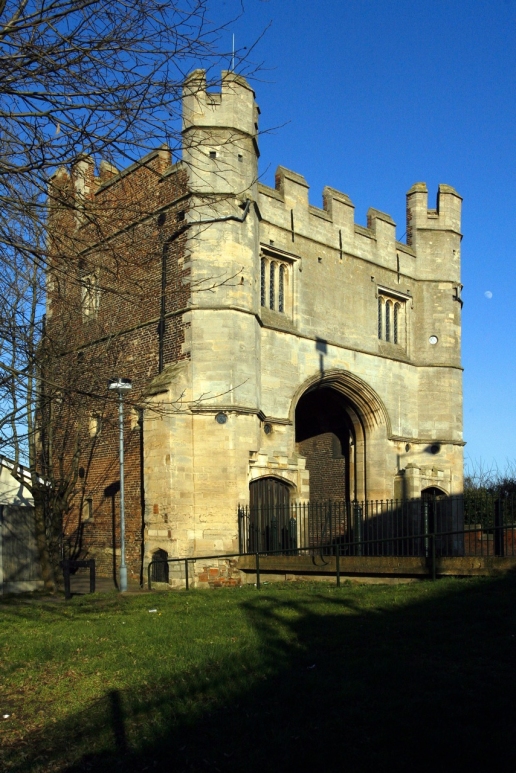 Margery Kempe, the Lynn mystic, might have seen the re-building started.  But Christopher Columbus, Henry VIII, William Shakespeare and Cardinal Wolsey weren’t even born. It took a visit by Cardinal Wolsey in August 1520 to get the building finished.  He called in at Bishop’s Lynn that year, no doubt accompanied by the Bishop of Norwich, Richard Nykke.  Lynn was on his patch. The Cardinal had just leased Hampton Court Palace in Surrey, and was starting a lavish five-year improvement programme there.  He would have been impressed by Lynn’s two huge catholic churches, the five monasteries, the Mayor’s Town Hall plus civic buildings, and the merchants’ houses and guildhalls. But what would he have thought of the half-finished South Gate?  And how would the Bishop of Norwich have answered the Cardinal’s inevitable question: “What’s happening here then?”  We don’t know. But we do know that Mayor Thomas Myller commissioned two local builders on 5 October 1520 “to make up the South Gates as good and cheap as they can get them…. so that the same be finished about the XXIst September next following.”  Perhaps the Cardinal had said he’d be back in October next year? The new builders abandoned the fan vaulting in favour of cheaper barrel vaulting.  Look carefully and you can still see the beginnings of the fan vaulting under the arch.  Plus grotesques keeping an eye on the traffic. 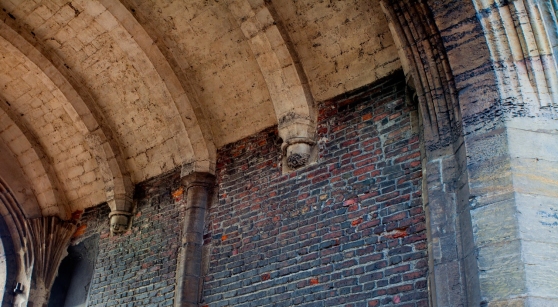 Seven years later, Bishop’s Lynn was re-named King’s Lynn as part of Henry VIII’s dissolution of the monasteries. The South Gate did good service to the town – though it couldn’t keep out the Parliamentarians in 1643 during the Civil War. Nowadays, more than 1,200 vehicles a day (Norfolk County Council survey 2007) come into King’s Lynn through this 580-year-old gate: double-decker buses, HGVs, cars, even a few brave cyclists.  Volunteers open it up twice a week during the summer. But it deserves better.  The volunteers and many others are promoting a scheme to divert traffic through a small adjacent park, and make a new park round the South Gate.  It would improve traffic flow.  This is a landmark building, Grade I listed and a Scheduled Ancient Monument.  It deserves to play a major role in a town that is proud of its architectural heritage. And looks after most of it fairly well.